There isn’t anything much cuter than a baby calf. Black, white, brown fuzzy little creatures!

Dairy farmers take the responsibility of raising healthy calves very seriously. It only makes sense, because the calves are the future of the farm. Healthy heifer calves equal great milking cows.

There are numerous things dairy farmers can do to ensure the calves born on their farm are kept safe and healthy. 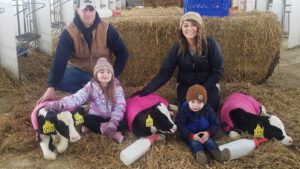 Colostrum, also know as first milk, is a form of milk produced by the mammary glands in late pregnancy. It contains proteins, carbohydrates, fats, vitamins, minerals and specific kinds of proteins called antibodies that fight disease-causing agents such as bacteria and viruses. The level of antibodies in a cow’s colostrum can be 100 times higher than in regular milk. Therefore, it is vital to the future of the calf that it not only gets the proper amount of colostrum, but also gets it in a very timely manner. Calves are only able to absorb the antibodies in the colostrum within a narrow 48-hour window. So, the faster a new calf can consume four quarts of the colostrum, the better. When the calf is left with the cow, we have no way to know the quality or quantity of the colostrum the calf has received, if any. By removing the calf from the cow and feeding it colostrum we will ensure a healthy future for that calf. 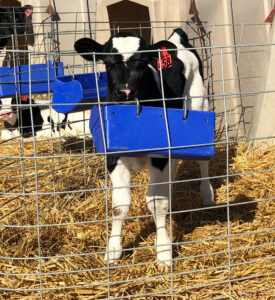 Not all cows are maternal….Safety First!

Generally, dairy cows are not very maternal. Dairy farmers tend to let the cow lick off the calf after birth, which helps remove all of the “baby goo” and dry the calf off. The licking is also very stimulating for the calf. Sometimes the cow will not lick the calf off and it needs to be hand dried. Sometimes the cow will be very aggressive towards her calf and stomp, step on or even lay on the calf. Frequently the cow can become aggressive to other cows as well as people, putting them in harm’s way. Removing the dairy calf from its mother is the safest and the healthiest for the calf.

Momma licking one of her newborn twins on the Murman Dairy, near Glenvil, Nebraska.

Calves on a dairy farm are exposed to a variety of germs right from the start. Dairy farmers o a great job of keeping the calving area clean and sanitary, but cows are cows. Removing the calf from the calving area helps reduce the exposure to bacteria. It’s not only human mommas that like to check out other mommas’ babies. Cows also like to sniff, lick and sometimes even steal another cow’s baby. You all know how a cold or flu bug just charges its way through your house. Yep, that’s what we want to avoid. (Side note: I need to mention that this is probably not the best idea for our human babies, even though it might keep them healthier during the cold and flu season. HaHaHa.) This is why calves are usually moved to individual housing for about eight weeks. This time gives them the environment for growing healthy and strong and allows dairy farmers to keep better tabs on each individual calf. 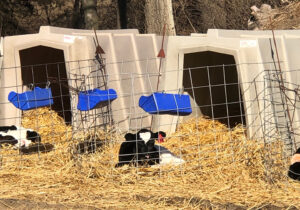 In closing, I will say that the proper amount of colostrum in a timely manner would be the leading reason that dairy farmers remove calves from their mothers at birth–followed closely by the safety of the calf, the cow, farm personnel and the ability to shield the calf from unnecessary germs.